Sometines, you may need to deworm your horse. Happily, if you do – and you should find out if you do with a fecal egg count rather than just blindly deworming on some random schedule – there are a number of reasonably effective and very safe products out there.  However, there are also quite a number of products out there that don’t work at all.  This article is mostly about those.

In addition to safety and fairly good effectiveness, deworming compounds have one other thing in common; they are all chemicals.  “What’s a chemical?” you say. Well, by definition, a chemical is, “Any substance used in or resulting from a change to atoms or molecules.”  Of course, that definition encompasses, well, just about everything, but even so, a segment of the population is afraid of chemicals (especially the ones that are produced in laboratories). There’s even term for the fear – chemophobia. If someone has chemophobia, all chemicals are bad.  In their thesaurus, the word chemical is a synonym for words like “hazardous,” “toxic,” or “artificial.” As such, since a dewormer is a chemical, it’s also bad: bad for people, horses, the environment, and bad for just about anything else that comes to mind (including parasites, too, I suppose).  While a chemophobe may love his or her horse enough to try to control parasites, he or she also wants to keep from chemical exposure, too (never mind if the chemicals are safe and do their job). The problem, insofar as killing equine internal parasites goes, it that there’s no effective way to kill parasites without chemicals.  In fact, there’s no way to completely avoid chemicals period.  Life is chemistry.  Every breath you take contains dozens of chemicals.  While some chemicals can be life-saving (e.g., antibiotics), others can, in fact, be pretty awful (e.g., dioxin).  But, mostly, chemicals just do their job and nobody really notices much (e.g., water). Natural conditions for the horse. Good luck catching him!

For chemophobes, effectively color-blind to the nuances of life and chemistry, the fact that deworming compounds are also chemicals makes them a non-starter.  So they look for something else; usually something that’s “natural” or “alternative.” Unfortunately for the horse, those “alternatives” just haven’t been shown to work.

ASIDE:  It might occur to you is that parasites are totally, 100% natural for horses.  As such, the most “natural” thing would be to not deworm horses at all, and let the chips fall where they may.  But there seems to be a limit to naturalness; even the most avid “natural” horse keeper doesn’t mind keeping a horse in a stall as opposed to turning him out in, oh, Montana and seeing if he’ll come when you call. So, while trying to control equine internal parasites is a good idea, it’s the “How?” question that becomes problematic if you are intent on avoiding the obvious choice (use a dewormer).

In the “natural” wild, internal parasites aren’t the same problem as they are in domesticated horses.  That’s mostly because, in the wild, horses are running around all the time, roaming over miles and miles.  They aren’t confined to a fenced pasture, where they eat grass, poop, and eat some more of the now-contaminated grass.  In the wild, they get away from their poop, which is the source of parasite eggs. Eventually, if the eggs aren’t ingested, they wither away and die.  Horses also develop a reasonably effective “natural” immunity to parasites. Over the millenia, horses and internal parasites have co-existed pretty well – it doesn’t do a parasite any good to kill its host.  But since horses today don’t roam wild, and they do live in pastures and stalls, periodically, due to increased exposure, it may be necessary to do something about their parasites.  Dewormers work pretty well; here are some “natural” alternatives that don’t.

1.  “Proper nutrition” –  Of course, horse should get the best quality feed available. Happily (for the horse anyway), he’s set up so that he can usually get everything that he needs from some pretty simple ingredients – good quality forage and water. But while proper nutrition makes a healthy horse, and a strong immune system, a healthy horse is exactly what parasites are looking for, too. Good health for your horse is the goal, but it’s certainly no impediment for an internal parasite. Another day at the supplement aisle

2.  Supplements – You can buy buckets of colorfully packaged “natural” products.  And they all have one thing in common – there’s no evidence that they do anything to prevent infections by internal parasites in horses.  Here are some examples: 3.  Herbs – While some folks get their herbs in convenient buckets, in many places around the world, plants are fed to horses and other large animals in an effort to control their internal parasites.  Unfortunately, that’s not necessarily because they’re so effective –  the main reasons that people use plants to try to control their animals’ internal parasites is that plants are accessible, easy to prepare and administer, and they cost very little.  It gives them something to do, as well, I suppose.

The disadvantage, of course, is that there’s no evidence that they work.

ASIDE:  You have to admit, that’s a significant disadvantage. While the fact that various cultures use plants may imply that there is a rich vein of as-yet-unexplored therapies potentially available to veterinary medicine, it more likely means that there is a long history of traditional use of ineffective, albeit relatively safe, locally-available therapies.  Lots of them.  I mean, up in British Columbia, Canada, they found that people use 19 different plants to try to control parasites in poultry, and 11 in rabbits.  It’s not like you don’t have choices – you just don’t have a whole lot of good ones.

People really do study this stuff.  Honestly, alternatives to conventional deworming products are sorely needed, and especially with the increasing problem of parasite resistance. And it’s not like thinking about using an herbal/botanical product is lunacy – you can find some preliminary evidence, as well as some test tube studies, that indicate that some specific herbal and botanical products have some activity against parasites.  For example, there’s a report that micronized onions and coconut pulp reduces parasite load in horses. And that’s all fine, I guess, but where are you going to pick that mix up?  Micronizers aren’t cheap, either.  I think that your horse is likely to be much better off if you use a product that has been shown to be safe and effective, such as a conventional dewormer, as opposed to giving your good friend some unmeasured dose of a substance that hasn’t been shown to work in horses.

Commercially available prepared herbal dewormers generally have a combination of ineffective or unproven ingredients. However, if you use more than one ineffective ingredient to try to kill parasites, they don’t all suddenly become effective.  Nonsense does not become sense as it accumulates. 4.  Homeopathy.  Even back in the 19th century, Ambrose Bierce, the famous American author and satirist called homeopaths, “The humorists of the medical profession.”  There is no credible evidence that homeopathy is an effective treatment for anything, and it’s certainly not an effective way to control your horse’s parasites. While it’s OK with me if you just stick your fingers in your ears if anyone starts talking to you about homeopathy, if you want to learn more (and have a good chuckle), CLICK HERE.

5. Aromatherapy with essential oils.  Volatile (essential) oils are concentrated oily liquids derived from plants that contain aromatic compounds. Examples of plants that contain volatile oils include garlic and citrus; you can smell garlic, or lemon, or orange from across the room, right?.  Curiously, it’s generally advised that people never use essential oils internally – they can be toxic – so you’re left to figure out for yourself how they are supposed to work.  I figure it can’t be the smell that’s offensive – what do you think it smells like inside the intestines?

HUMOROUS ASIDE:  I have seen “warnings” not to store essential oils next to homeopathic remedies because the oils dilute the energy of the homeopathic remedies.  To me, that warning is sort of like warning someone not to have a seance anywhere near a UFO landing site.  You can come up with your own examples. Used in gardens, diatomaceous earth absorbs oils and moisture from the external skeleton of insects, and dries them out, killing them. However, in order to work it has to be dry. Trust me, as someone who has opened up more than a few feet of equine intestines, it’s not dry in there.

But, heck, if if works externally to kill bugs, you might as well try it internally, right? (NOTE:  This is not how logic works.)  Undaunted, diatomaceous earth advocates maintain that the particles have spiny edges that piece the parasite’s outer layer; a soily Brutus taking action against a parasitic Julius Caesar, as it were.

While the idea that eating some pulverized fossil remains may strike some of you as silly on it’s face (I’m raising my hand, too), there have been a few studies using diatomaceous earth to try to control parasites.  The results have been pretty unanimous.  Whether it be goats in North Carolina, cattle and sheep in the UK, or lambs in Iowa, diatomaceous earth just doesn’t work (CLICK HERE to see research summaries). Good studies haven’t been done in horses – it’s probably not worth the time. ONE OTHER THING:  The best thing – the most “natural” thing – to do in the war against equine internal parasites at all is to deworm only when necessary and to do other things to control the parasites, such as manure removal.  Nothing’s more natural than letting things be.  Work with your veterinarian to monitor the parasite status of your horses, and don’t deworm any more than is needed. CLICK HERE to see my summary of the American Association of Equine Practitioners’ Guidelines.  And if you are intent on using a “natural” product in spite of all of the caveats and information showing that most just don’t work, please at least also occasionally have a fecal exam performed to make sure that your horse isn’t developing a problem.  No treatment is any good if it also doesn’t work. 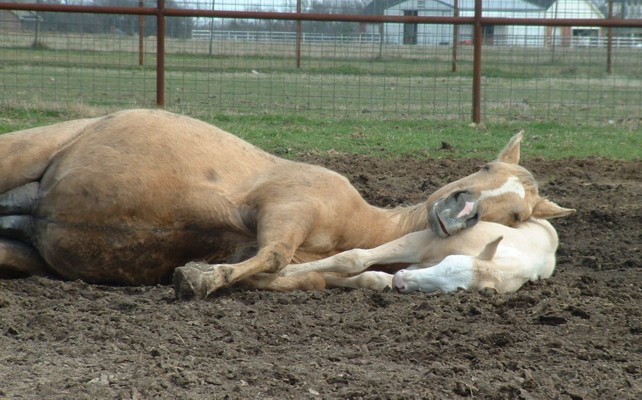